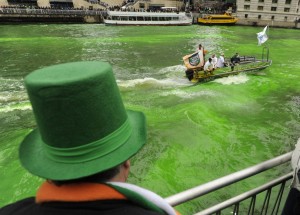 Saint Patrick’s Day is annually celebrated feast that takes place on March 17th which is the date of death of the patron saint of Ireland; Saint Patrick. It is a national celebration in the republic of Ireland, and a custom but not official in Northern Ireland. The Saint Patrick’s Day is also worldwide celebrated for all Irish and even people who have no Irish origin. People celebrate the feast wearing green garments, enjoying the Irish gastronomy which includes alcohol, Irish drinks, and attending to parades. Some pubs sell green bear for the holiday.

As a religious holiday it was made an official Christian commemoration at the beginning of the 17th century and throughout the history, it has been observed by many other churches and countries, even in South America by Argentina which is the 5th Irish community out of Ireland.

It is said that Saint Patrick was born in a Romano-British family in the 4th century and his father and grandfather were linked to the Christian church. One day at the age of 16 Saint Patrick was kidnapped by Irish raiders and taken as a slave, during that time while working as a shepherd he “found God” and God himself showed him how to scape, once Saint Patrick made it he started evangelizing all pagan Ireland until he died on March 17.

People use to wear green during this celebration because of what is said about the shamrock which was a green three-leaved plant that Saint Patrick used to explain the Holy Trinity to the pagan Irish.