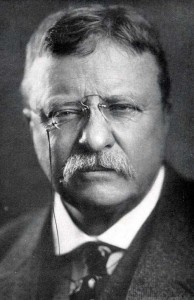 Theodore Roosevelt was the 27th president of the United States between 1901 and 1909. He is remembered for his enthusiastic personality, a wide range of interests and achievements, his “cowboy” personality, and his leadership of the Progressive Movement; a period of social activism and reform in the US between 1890 and 1920 meant to end corruption.

As many other presidents, before becoming one of them Roosevelt held positions in local, state and federal government. Besides, Roosevelt’s achievements as a naturalist, explorer, hunter, author, and soldier contribute both to its fame as their political positions.

Theodore Roosevelt was born into a wealthy New Yorker family in October 1857, he was a sickly child so he used to spend lots of time in doors, and he was a home-schooled child and an eager nature student. Later at Harvard College he studied biology, boxed and developed interest in naval matters.

After this he came in politics in 1881 he was elected to the Assembly of the State of New York as its youngest member. In the same decade Roosevelt abandoned other political positions to get in charged of the war with Spain helping the famous Rough Riders with some affairs in Cuba. Roosevelt gained national fame for his courage during this event. He return to the United States and was elected Governor of New York. He was candidate for vice president with William McKinley, later McKinley was assassinated and Roosevelt became President at the age of 42 in 1901, making him the youngest president in the history. He was reelected in 1904.

After other elections in 1912, he went on a major expedition to South America. During this trip he fell ill with malaria, which deteriorated his health. He died a few years later, at the age of 60.